Over the years, our real estate pioneers continue to contribute unstintingly, working hand in glove to share the responsibilities of developing Singapore’s landscape. Through their foresight and vision, REDAS has evolved to become an established institution plugged into a global network of like-minded organisations dedicated to excellence, creativity and enterprise in the real estate industry.

The REDAS Honorary Award was a tribute to the late Mr Kwek Leng Joo for his dedication and contribution to the Association as well as his deep commitment for environmental sustainability and corporate social responsibility. The late Mr Kwek served in the REDAS Management Committee for 14 years from 1981-1994. During his tenure as REDAS President in 1989-1990, the late Mr Kwek initiated the REDAS’ Research & Education Fund to provide avenues for the Association to undertake research programmes, award scholarships, bursaries, gold medals, book prizes to various institutes of higher learning. Through this programme, the Association raised its bar on corporate social responsibility and stablished collaborative partnership with premier universities like NUS, NTU and SMU. 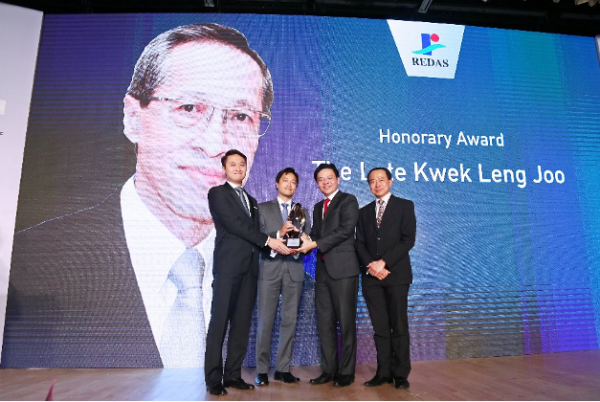 Fittingly, the Association initiated a ‘Lifetime Achievement Award’ to honour and acclaim its pioneering group. This award recognises business leaders who have reached the epitome of achievement and who have made significant and on-going contributions to the community, environment as well as to the Association over the years. It is the highest honor that REDAS bestows to its members. In 2014, the inaugural award was presented to REDAS Patron Mr Kwek Leng Beng for his outstanding achievements and significant contributions to the community and the built environment. This Award was also presented to Patron Mr Kwee Liong Keng in 2016, Past President Mr Daniel Teo in 2017, Patron Mr Philip Ng in 2019 and Past President Mr Edmund Cheng in 2021.

Since the founding of the Association in 1959, illustrious business leaders have come forward to serve in the REDAS Management Committee (MC). In 2016, REDAS presented the inaugural REDAS Luminary Service Award to 5 MC Members who had served than 15 years on the MC –  Mr Chia Ngiang Hong (since 1989), Mr Khor Thong Meng (since 1991), Mr Ng Chee Seng (since 1995), Mr Lim Ee Seng (since 1997) and Mr John Khoo (since 2001). The award was also presented to MC Members Mr Tan Swee Yiow (since 2003) in 2017, Mr Chng Chee Beow (since 2003) in 2018, Mr Chong Hock Chang (since 2007), and Mr Liam Wee Sin (since 2007)  in 2021. The award recognises their long service, marked by unstinting dedication and consistent commitment to the Association. They represent leaders who have reached the epitome of professional stature and achievement.

Previous
Next
Scroll to Top